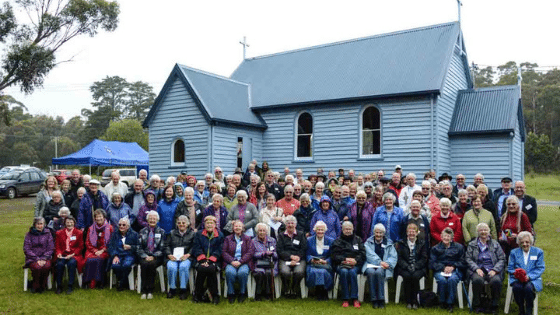 Celebrations marking the 75th year since the beginning of the Missionary Sisters of Service (MSS) began with a pilgrimage through Tasmania to Bruny Island where it all began.

In a spirit of joy and celebration, a group of 28 pilgrims spent five days travelling through Tasmania to mark the commencement of the 75-year anniversary of the Missionary Sisters of Service (MSS).

The pilgrims came from Queensland, Victoria, South Australia and Tasmania and included 13 MSS and 15 friends and colleagues. The pilgrimage commenced in Launceston, at Calvary St Vincent’s Hospital, which is the site of the first ‘foundation house’ of the then Home Missionary Sisters Our Lady.

In the chapel at St Vincent’s, MSS congregational leader Stancea Vichie lead a reflection that acknowledged the courage and foresight both of Fr John and the four initial women who responded with a yes. Acorns from the same oak tree that stood in the front yard of the foundation house, which still stands on the grounds of St Vincent’s were handed to each of the pilgrims.

“Acorns that fall from the tree are the source of new life,” said Stancea. “New life has been sprouting forth from the ‘acorn’ of the women who came together in 1944 in that home in Frederick Street, a home which was provided through the generosity of the Sisters of Charity.”

After visiting further places significant to the MSS story in Launceston, the bus took the pilgrims to Scottsdale and Derby, the first parish the early sisters visited on mission. Parish priest of Scottsdale, Fr Edwin Thundathil Xavier, celebrated Mass, which was followed by a generous lunch prepared by the small parish community.  It was a time of warm reunion and much story telling and sharing.

Over the following days the pilgrim bus worked its way to Hobart via Longford, Oatlands and Richmond. Stories of the sisters’ early missions in each of these areas were read over the bus microphone so that the pilgrims could deepen their knowledge and understanding of the extensive work and impact contributed by the MSS in each of the areas.

In each place the people among whom the sisters had previously lived and worked welcomed pilgrims. After a brief ritual in the parish church, they were treated to a generous morning or afternoon tea, or lunch, lovingly prepared by the locals.

According to Corrie van den Bosch MSS, “It was heart-warming to experience the love people retained for the sisters they had known over the years. Each place evoked treasured memories and stories of the years the Sisters worked there.”

The climax of the pilgrimage arrived on Sunday 25 November when the pilgrims journeyed to Alonnah, Bruny Island, joined by three more of the MSS (who live in Tasmania), along with another busload of pilgrims, and many others who travelled independently.

More than 100 people gathered in the Alonnah community hall for lunch and an official welcome by Chris Smith, Chair of the John Wallis Foundation Hobart Branch. Following this, everyone gathered outside St Brendan’s church for the blessing and dedication of a memorial to Father John Wallis, the Founder of the Missionary Sisters of Service, and the women who came together in 1944 to begin what became the MSS community, and those who followed them into the highways and byways.

The memorial, situated in the grounds of St Brendan’s church, comprises two interpretative panels telling the story of the beginnings and development of the MSS.  Between them is a sandstone feature with a silhouette of Fr John on his bicycle depicting the way in which he visited people on Bruny Island back in 1933.

Bruny Island has particular significance to the MSS story given this is where the seed was sewn in Fr John, then a 23-yr-old country Victorian priest who was fresh out of the seminary. While visiting Catholic families on the remote island (on bike, foot and horse), he met a mother, Kit Hawkins who asked, “who is looking after the spiritual needs of our children – out of sight, out of mind”.   Eleven years later, in 1944, a number of courageous, pioneering women took up the call from Fr John to “go out into the highways and byways of rural and remote Tasmania”, and later mainland Australia.

While the initial purpose of the MSS was to provide spiritual education and support to isolated families and communities, the Sisters’ mission adapted to the needs of the people they encountered over the years. In later years they have worked in different situations in adult formation, chaplaincy, counselling and other areas of urgent concern in rural and urban areas, especially with groups of people who have been on the margins.

Today there are 26 MSS still living in Australia – in Melbourne, Toowoomba, Hobart, Mackay, Bribie Island and Whyalla. Though older and less mobile, they continue to serve in their local communities, in whatever way they can, as well as continuing to read the signs of the times and setting up structures that will enable the charism to be carried in new and innovative ways by the laity.

“It’s important that while there are still 26 of us alive, that we can mark this amazing time,” said Stancea Vichie MSS. “Seventy five years of service is something to celebrate. It also links in with the development of our mission being carried on by other people in a new way in the 21st century, always maintaining the spirit of the MSS and Fr John, through the John Wallis Foundation and now the new entity named Highways and Byways: a Community of Service.

“We are deeply grateful that the Spirit has been able to work through not just us as MSS, but through all of the people who have been part of the journey. So we want to give thanks for that.”

Throughout 2019 a number of events will be held to commemorate the 75-year anniversary of the MSS, including a special commemorative coffee-table cookbook with recipes and photos provided by the Sisters and friends.

A second book to be published during this jubilee is Dear Mother, Dear Father – John Corcoran Wallis’ Letters Home 1927 – 1949 by Bernadette T. Wallis, a fascinating and rich insight into the early life of Fr John Wallis from the time he entered the seminary at Springwood up, his early years as priest in the archdiocese of Hobart and through the early years of the Home Missionary Sisters of Our Lady, now known as Missionary Sisters of Service.

Emeritus Archbishop Adrian Doyle’s homily at the Mass following the dedication and blessing of the memorial.