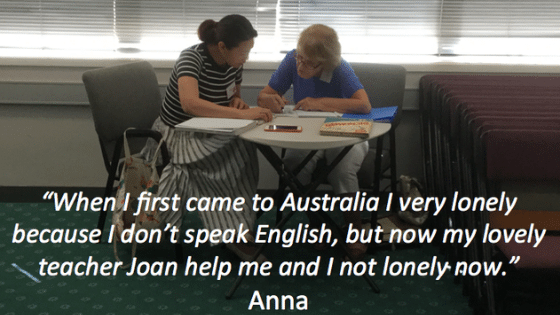 Language differences can be a great divide, but at Mitcham Baptist Church it has drawn the ‘local’ and the Mandarin speaking Chinese faith communities together.Weekly conversation English classes began at the Church last year with support from the John Wallis Foundation. A year down the track numbers have grown from four to 30 and the oldest student is 91 years old.

What began as an idea to support the older Mandarin speakers to manage better in the community has developed into a bridge building exercise where friendships have grown and the communities now mix with greater ease.

Anne Dixon and Hugh Macartney,both former teachers,started the classes after recognisingthat a lot of the older Chinese in the congregation were isolated, speaking little or no English and spending most days looking after grandchildren.

“The students vary in language abilities. Some are just beginning and others are involved in discussion groups on topics. We have one student who has a PhD in mathsso is very competent in Mandarin,” Anne said.

The benefits to everyone involved in the project are astounding. The students learn English, the tutors develop a greater understanding of the Chinese culture and the congregation is richer because the two language groups feel more like one. At weekend worship, morning tea is a much more united event where new friends mingle with each other.

One participant best sums up the success of the classes: “I came to learn English but found love.”

The congregation has thrown support behind the classes with about 15 people helping to tutor the students, including four who are fluent in English and Mandarin.