SHOWING OFF LOCAL LANDS AND CULTURE 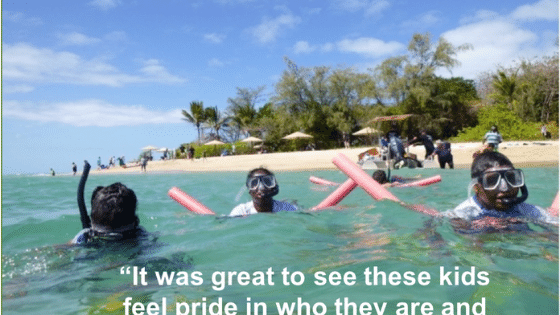 Something happened during a Wujal Wujal cultural adventure camp for young leaders last year. They were asked to show some non-Indigenous mates from Brisbane where they lived and share their culture.  Joh Anthonis, a counselor with the Wujal Wujal Justice Group, watched the locals change.

“They were explaining about bush food and important ceremonies and taking the visiting students to campsites and beautiful swimming and fishing spots. The kids from Brisbane were captivated and suddenly a different story, a positive story about Indigenous people,was being told and heard. Our kids were so proud,” Joh said.

Joh said the camp allowed young leaders, who are working hard at their secondary boarding schools, to showcase their community and to tell another story.

“It was great to see these kids feel pride in who they are and where they are from,” Joh said. “A lot of these kids do it tough, away from the country and family.”

The camp, funded by the Department of Prime Minister & Cabinet and with support from the John Wallis Foundation, included families who hosted the camperson their traditional land and shared their culture.

“Everyone was changed by the experience. “Our kids realised that the knowledge and skills they have are valued and respected by others,” Joh said.

Plans are underway for the Wujal Wujal students to visit Rivermount school and families later this year.