TAKING MUSIC TO WHERE IT MATTERS 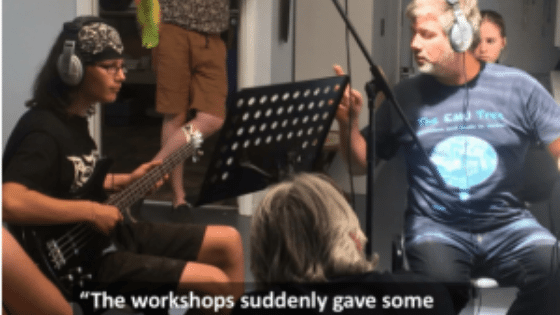 Kangaroo Island is known for its pristine environment. Its musicians are currently flying under the radar, but that could end if Carmel Batson has her way.

“There is no public transport on Kangaroo Island so many young people are isolated and disconnected from services,” Carmel said. For many, this can lead to risky behaviours.

For seven months they travelled to different community centres three times a week taking with them the computers, instruments and know-how to create music. And the young people came and experimented, discovered and developed their musical talents and interests.

“They would come to the workshops and tell us what they wanted to try. Some used, for the first time, a computer music platform, some played instruments, putting together the few chords or notes they knew to create a sound that they could then use on one of the music platforms, refining it over the week,” Carmel said.

The results of the workshops, two funded by the John Wallis Foundation, have been astounding. Seventy-five people participated, a CD featuring 23 tracks was produced, talents have been discovered, passions ignited and several of the young people have found work. One performer played at the Island’s first fringe festival this year, another has started doing local gigs.

“The workshops suddenly gave some young people the confidence to create.”

← THE FAMILY THAT EATS TOGETHER .... HOPE GROWS IN SAFE PLACES →