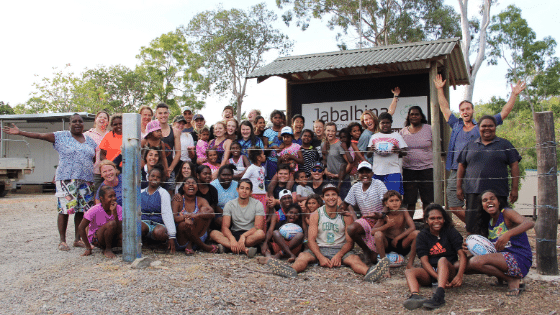 ‘’I am so appreciative of my time at Wujal Wujal, I didn’t know that the culture here would be so strong and that people would be so willing to share it with us, I was so happy with how friendly everyone was, I had a great time’’ (Rivermount College Student)

The Youth Leadership Camp, organised by Wujal Wujal Justice Group took place from 10/09/2017 to 22/09/2017. The camp focused on two-way learning between Indigenous youths from Wujal Wujal and Year 10-12 students from the River Mount College in Yatala near Brisbane. The young people joined together in a cultural adventure journey from Cairns via Cape Tribulation to Wujal Wujal and surrounds, then on to Shipton’s Flat, Cooktown and Port Douglas, incorporating the homelands that make up the Kuku Yalanji. Kuku Ngyungul and Kuku Jalunji homelands.

There were more than 40 local Indigenous youths who participated in the camp activities, together with 13 Rivermount students from Yatala and 12 YWAM (Youth With A Mission) youths from all over the world. They were looked after at the various stages of the journey by 8 Wujal Wujal TO’s/Elders, 12 Wujal Wujal Justice Group staff, as well as nine local Youth Leaders. These Youth Leaders were selected from the various boarding schools, based on their attendance and behaviour. In total, more 100 people from different backgrounds and cultures came together, all sharing Culture, learning from each other and caring for Country.

“The Youth Leadership Camp was a great project for the community to get people motivated and involved, and people really took pride in showing off their ‘bubu’ (homeland) to the visitors. The Justice Group staff and Youth Leaders provided deadly support in making our visitors feel welcome in the amazing Kuku Yalanji bubu. Everyone had a great time, a lot of laughs, and the younger generation got to spend time out bush with the Elders learning a thing or two about their own culture and learning from the visitors too about their lives in mainstream society. It kept the Wujal Wujal Youth engaged and away from the bad influences such as drugs and alcohol and at the same time rewarded their commitment to school and becoming future leaders of the community. “
By Waratah, Leader

← DECEMBER ISSUE OF HIGHWAYS AND BYWAYS IT MAKES OUR ANCESTORS HAPPY! →