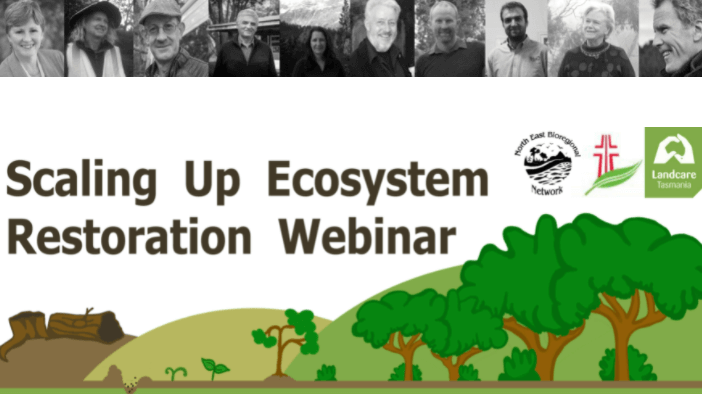 The Webinar, which occured live in late 2020, was coordinated by Tasmania’s North East Bioregional Network with a grant from Highways and Byways, and was originally planned as a community based Symposium. However, the onset of the global Covid-19 pandemic required a change of tact, and an online international event evolved. Hosted by former politician and environmental advocate Christine Milne AO, the webinar features a line-up of Australian and International speakers who cover a wide range of ecological restoration perspectives, principles and projects

Presenters include Todd Dudley, President of Tasmania’s North East Bioregional Network, who speaks of its project – the largest of its kind in Tasmania – to restore pine plantation at Skyline Tier to native forest, and the economic and social benefits which can result from environmental restoration initiatives. These sentiments are echoed by James Aronson as he outlines the work of the EcoHealth Network to link public health research and interventions with restoration projects across Australia and New Zealand.  Landcare Tasmania’s Peter Stronach also addresses the importance of engaging and involving local communities in restoration projects, due to their local knowledge, networks and commitment.

Journalist and author Paddy Woodworth joins the Webinar from Ireland to advocate for greater recognition of the Society for Ecological Restoration’s (SER) international standards for ecological restoration. Dr. Tein McDonald, SER member and President of the Australian Association of Bush Regeneration shares her experience developing Australian standards and the content of both these and the international approach.

Webinar participants who attended the event live reported that they felt there was a great arrangement of speakers who covered a wide range of viewpoints. It was noted that the growth of ecological restoration efforts is vital not only through the next decade, but well beyond to preserve the wellbeing of the Earth. Being bold and experimenting is one way to achieve it, but government, governing bodies and communities all have a role in achieving this, including with funding and practical participation.

Since the Webinar, Highways and Byways has further partnered with North East Bioregional Network, launching the Restoring Nature and Communities project on World Environment Day on 5 June 2021. Funded through the Highways and Byways Parker Sub-Fund, this initiative will provide employment and training to four long-term unemployed workers over 20 weeks, working on the Skyline Tier in north-east Tasmania.

For further information or to watch the Webinar click here. 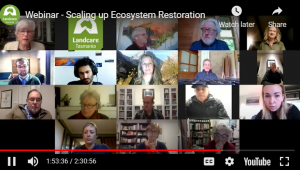