GAIL WORCELO ON YOUTUBE: OUR PLACE IN THE UNIVERSE 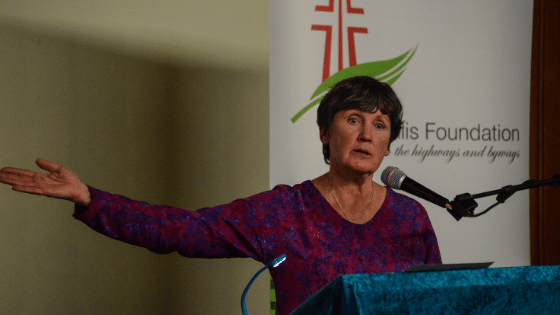 From the first moment Gail Worcelo from Green Mountain Monastery in Vermont USA, began her talk in Parkes NSW, we knew we were in for something special.

In a room beautifully adorned by ‘floating’ panels of animals and natural environments, Gail excited and inspired the audience as she involved us in the Universe story leading us through a journey of “Wandering” through time. 10 year old Aaron in the front row was full of questions, and the rest of the audience soon joined in as together we explored our place and our responsibilities here on earth.

In summing up this 21st century Gail gave us three points:
1. The Glory of the human has become the desolation of the Earth.
2. The Desolation of Earth is becoming the destiny of the human.
3. All human institutions, programs, professions and activities will be judged – by the extent to which they inhibit, ignore or foster a mutually enhancing human-earth relationship.

Gail was then followed by our second speaker, Guy Webb, from SoilCquest, who gave us a powerful and grass roots example of taking responsibility for future earth health.

Guy, an agronomist based in Forbes, told the story of how he has brought together an amazing team of scientists and researchers who are making stunning advances in capturing carbon in the soil through fungi. And it all began in the Parkes Forbes area!

Once again the audience was spell bound and Guy continued to respond to many questions from those gathered during the beautiful afternoon tea provided by the Catholic Parish of Parkes.

Two days later Gail delivered another powerful address in Bathurst at the Rahamim Ecology Centre with Sally Neaves who is the Sustainability Educator at Rahamim.

From Sally we  learned of the restoration of the land at Rahamim, bringing with it the return of many wildlife long gone and an impressive water retaining capacity. In such times of prolonged dry this land is not only surviving but thriving.

Gail challenged the audience to think in longer spheres of time and to build new structures of consciousness and culture, as we take on the shared responsibility for our planet moving forward not backwards – into the eco-zoic age – our house of life!

Gail presented her final John Wallis Memorial lecture in Melbourne on Tuesday 10th July at Abbotsford Convent.   This lecture is available on YouTube.  Click on the link.

Gail Worcelo delighted her audience when she delivered the John Wallis Memorial Lecture in Melbourne July 10.  Listen here to her inspiring vision on the future of our Planet and our role in it.   Click here for the full story and photos.