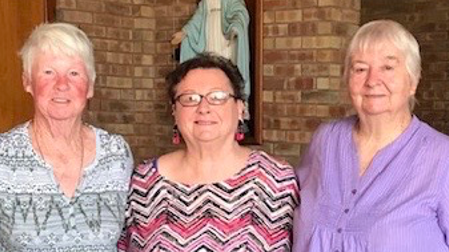 Most prisoners are released from the Port Augusta and Port Lincoln Prisons and the Cadell Training Centre carrying little more than a plastic bag of personal belongings. But the volunteers from the Port Pirie Diocesan prison ministry team (pictured) wanted them to be given something that showed care and support, in the form of a blue or pink cloth bag full of practical goodies.

Supported by Highways and Byways, the team distributed 80 bags to released prisoners in 2019. Each bag contained a pen and paper, $10 phone card,  $20 Woolworths food card, hand towel and toiletries, including soap, toothpaste, toothbrush, disposable razor (for men), sanitary items (for women) deodorant, tissues and a comb.

Jenny Kondylas, a prison ministry team volunteer, said it is important to give a person leaving prison a more dignified start in the world.

“When a prisoner is released from the regional prisons they are given a plastic bag with the clothes they wore into prison. If they don’t have independent transport, they are given a bus ticket. Some prisoners may have to wait a whole day to get a bus to somewhere like Ceduna,” Jenny said. “Now they can get something to eat, call someone and feel better before heading off to wherever they are going.”

“We want to give prisoners more dignity and a sense of self-worth knowing that other people care. It may help to keep some people out of prison in the future, a real social justice initiative in the local Catholic community.”

At first bags were purchased commercially, but last year, as part of their religion and social justice initiatives, students from Caritas College, in Port Augusta, made bags and collected toiletries from Woolworths and Coles.

Jenny hopes that each year students from one of the four colleges in the diocese will be invited to make the bags and help raise funds for the contents, which cost about $50 each. Local businesses, parishes, members of the Catholic Women’s League, and Knights of the Southern Cross have also donated goods and money.