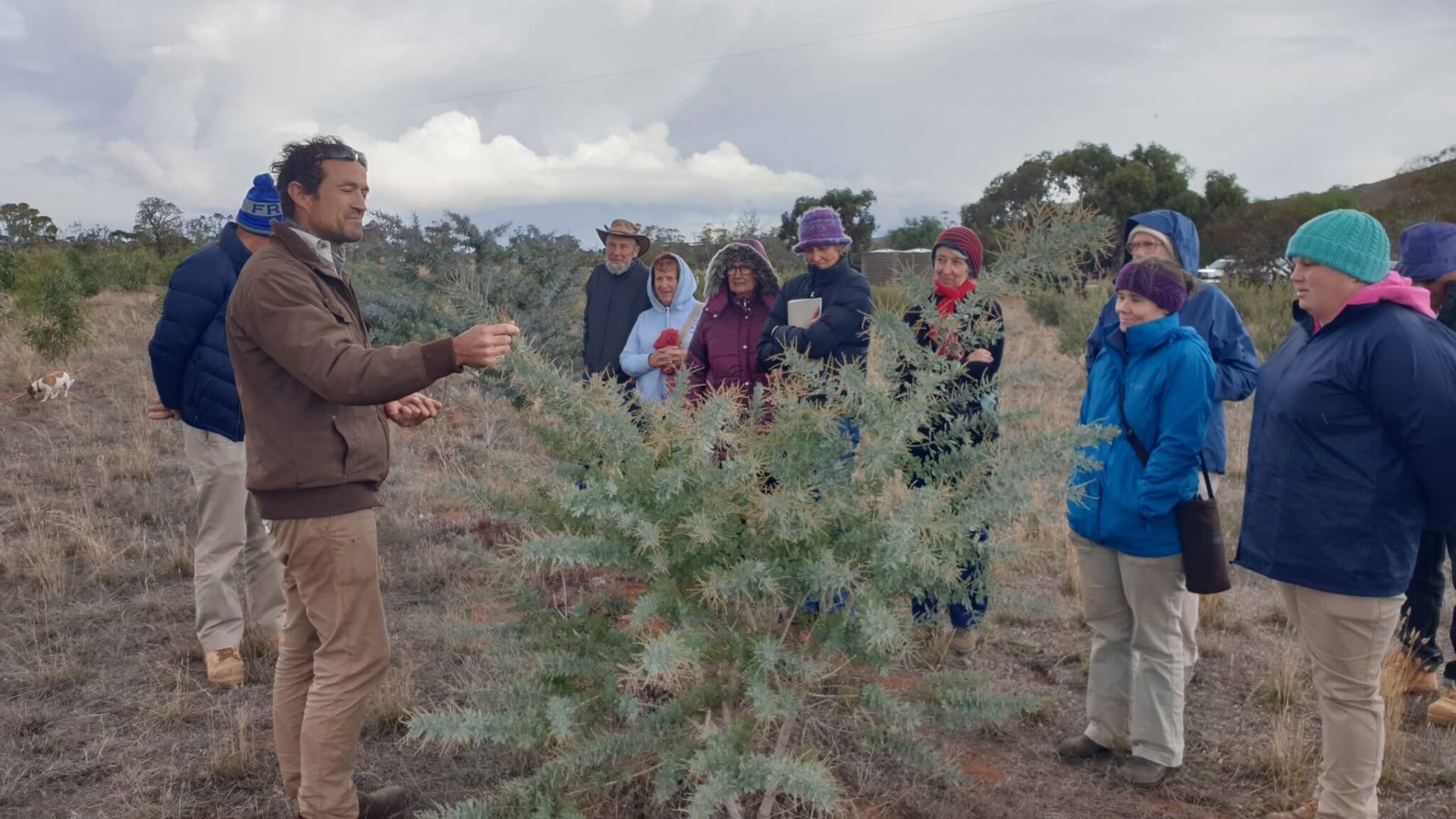 The threat of rain and the chill of late Autumn did not deter a group of South Australian land managers from coming together in May in the Mid Murray region for a field trip to explore native acacia farming.

“This region is marginal farming country” Mid Murray Landcare’s Aimee Linke explained. “We have significant erosion from over cropped and grazed land; our creeks and their banks are affected, and our roads and fences are covered in soil.” she said.

With acacia plantings proving to be a viable farming alternative for semi-arid zones, Mid Murray Landcare was keen to explore the benefits with local land managers. “We wanted to showcase the commercial and biodiversity potential of acacia trees and shrubs to encourage land managers to diversify their practices” Aimee said.

With the support of Highways and Byways, Mid Murray Landcare took 19 land managers on a field trip to an acacia property in Sanderston run by Angus Jones. Angus’ business Wattle We Eat has been successfully growing and harvesting acacia in the region for over 15 years.  His wattle seeds are supplied to the food and beverage sector and are used in nutritional supplements and beauty products.

The group toured the property to observe the trees and production systems in situ. Angus spoke with the group about acacias being a naturally drought adapted, fast growing perennial crop. He also addressed the marketability and environmental benefits of acacias, their fodder potential and contribution to shelter belts for native wildlife and improved livestock health and care. The group also enjoyed sampling a number of delicacies made with acacia seed, including coffee, cake and bread.

Acacia seeds have been a traditional food of Indigenous Australians for thousands of years, and there is increasing interest from mainstream food and beverage markets for this native food source. “It is a versatile and highly nutritious food product” Aimee explained. In fact, acacia seed is a good source of protein,  zinc, calcium, magnesium, potassium and iron. It can be eaten raw or roasted, and according to Ms Linke is absolutely delicious. And each acacia variety has a different flavour: “One even smells like Lindt chocolate” Aimee said.

The event was well received, with participants indicating that it contributed significantly to their knowledge and interest of acacias and introduced them to local resources and new networks.

Mid Murray Landcare is hopeful that the initiative will lead to the greater uptake of acacia plantings in the region and has plans for a similar event for additional land managers later in the year.

It is also considering an initiative to involve local school children in planting out and managing a small acacia crop at Meldanda, its 40ha community environmental educational site in Cambrai. “Many of these kids come from farming families. Involving them in a crop which they can monitor over time will give them practical skills and environmental knowledge that they can take home and share with their own families”. This in turn may lead to even more acacias being planted out across the region.

“The field trip showed us just what can be achieved with acacias. We are feeling really positive for the future and excited to explore these opportunities further”.