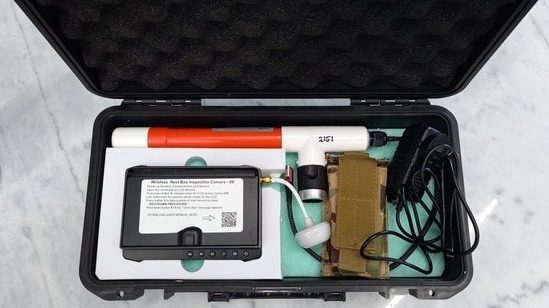 Lindsay McNaught hopes to see ringtail possums and eastern rosellas nest in the new accommodation that is being set up on his farm and on 22 nearby properties. It won’t be as good as the hollows in old eucalypts, but it’s a start. Hundreds of old hollow bearing eucalypts, the habitat of much indigenous wildlife, were burnt during the 2019 bushfires that tore through properties in the Tonimbuk, Bunyip North, Garfield North and Tynong North areas.

About 540 nesting boxes with GPS locations, built by local volunteers, school students and Men’s Sheds, are being set up on private properties and in the Mt Cannibal Nature Conservation Reserve, badly affected by the fires. It is hoped birds and animals, including parrots and ring-tailed possums will nest in the boxes. Any nesting activities will be captured with a camera on a pole, bought with funding from Highways and Byways. The data will then be recorded and analysed over the next three to four years.

Lindsay, who is President of Cardinia Environment Coalition said the data collected would create a picture of how native birds and animals recovered after a major bushfire. He said the information will show that the nesting boxes were used by native species, feral animals or not at all.

He hopes to see possums and birds use the nesting boxes, after the last of his remaining old eucalypts fell over during the recent wind-storms. His tree hollows hosted ringtail possums, birds and sugar gliders.

The eight different types of nesting boxes will be inspected during the breeding seasons and also in response to activities reported by property owners. Photographs will be taken of any nesting box ‘users’.

As well as recording important information, the nesting box project has also been a boost for the local communities, particularly for the property owners and the many nest box builders, including children. They have been involved in the project, discovering the wildlife that was lost during the fires and hopeful of the return of many birds and animals.

Everyone involved and anyone else who wants it will receive the report in a few years.