PUSHING AGAINST THE TIDE – KIRABATI 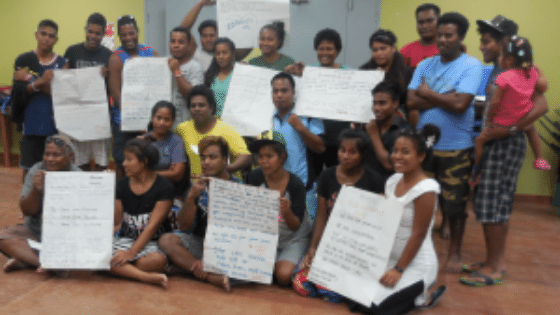 Pacific Calling Partnership (PCP) worker Maria Timon Chi-Fang shares the grief of many of the young people she helped train in Kiribati last year. Like them, she knows the threat climate change poses to the country she still calls home.

“They know it might disappear,” said Sydney-based Maria, who along with PCP Co-ordinator Jill Finnane, ran a three-day workshop in Kiribati last year for 20 young people. Maria knows that empowering the young people from these Pacific Island nations to take on the climate change battle is more important than ever.

The workshops, first held in 2015 and then again last year with $2000 support from the John Wallis Foundation, involved young people from 11 NGOs and youth organisations on the islands. They learnt about climate change, how to develop presentations, lobbying techniques and media skills. The capacity building enables them to lobby locally, but also provides them with the skills needed to be part of the international movement. Important networks were formed amongst the participants.

Two young people who attended last year’s workshop and two from Tuvalu are coming to Australia in April for a two week international advocacy training program on climate change, advocacy and leadership. Part of the intensive training by PCP (an initiative of the Edmund Rice Centre in Sydney) will involve advocacy meetings with MPs and other key organisations.