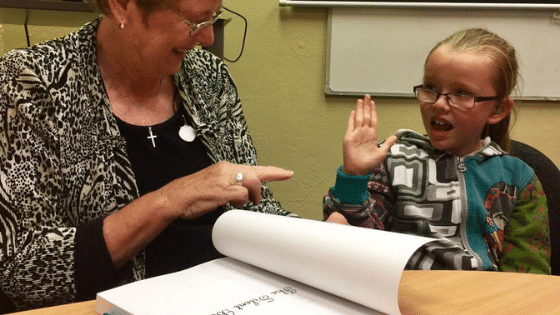 After many book launches in Australia, Bernadette T Wallis mss, author of The Silent Book, took the book on tour, visiting Ireland, England and Canada.  Speaking of her experience, Bernadette says:

It was a privilege for me to have been in Ireland at a time of great excitement in the Irish Deaf community.   Why was that?   There was a bill before Irish Parliament proposing the recognition of Irish Sign Language as the official sign language in that country.

Bernadette’s  book tells the Australian chapter of the Irish Sign Language through the experience of her Deaf parents, Don Wallis and Kathleen Walsh.  In 1875 the Irish Dominican Sisters established a school for the Deaf in Newcastle NSW.  Don and Kathleen went to that school.   There a whole new world opened up for them as it gave them a language, not in spoken words, but in sign: the Irish Sign Language as it developed in Australia.   When the Irish Christian Brothers established a school for Deaf boys in Castle Hill NSW in 1922, Don continued his education there.

The Irish Deaf Community was very excited to learn of this part of their language-story, and, of course, to meet a visitor from Australia who could communicate with them in their own Sign Language.  Bernadette’s own Irish roots added to the strong connection with the Irish community.   She commented many times how the people embraced her with their warm Irish hospitality.

Bernadette’s first visit was to the Deaf Village Ireland, in Cabra, Dublin, where she introduced the Deaf Community to her book.  From there Bernadette had book gatherings in Limerick, Cork, Killarney, Galway, Castlecomer in Co. Kilkenny, Westport in Co. Mayo, Derry and Belfast in Northern Ireland.  Besides Ireland, Bernadette went to London, Manchester,  Liverpool as well as Toronto in Canada.

The Silent Book: A Deaf Family and the Story of the Disappearing Australian-Irish Sign Language is available from the Missionary Sisters of Service, $30 plus postage.